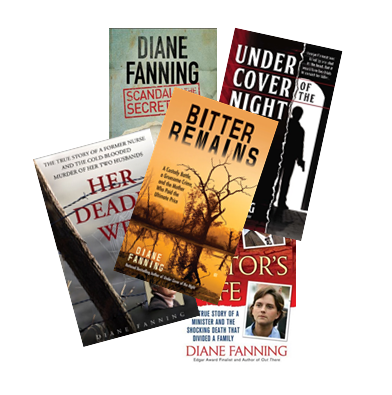 For more information check out https://dianefanning.com

She is the author of fourteen true crime books published by St. Martin’s Press and Berkley Books including the Edgar Award nominated WRITTEN IN BLOOD and the best-selling MOMMY’S LITTLE GIRL. For the work she began with THROUGH THE WINDOW, she received the “Defender of Innocence” award from the Downstate Illinois Innocence Project. Her latest true crime is BITTER REMAINS. Additionally, she has written ten mystery novels including five in the Lucinda Pierce series from Severn House. The latest is CHAIN REACTION.

She has been featured on 48 Hours, 20/20, The Today Show, Biography, Forensic Files, Deadly Women: Behind Mansion Walls, Deadly Sins, On the Case with Paula Zahn, Justice with Judge Jeanine, MSNBC News, Court TV, Issues with Jane Velez-Mitchell, the Discovery Channel and local TV channels and has been interviewed on dozens of radio stations coast to coast.

She is an experienced non-fiction, fiction and commercial writer. Has earned more than seventy Addy Awards in the twenty years she wrote for radio, television and print. She worked as an Executive Director at non-profit organizations for more than a dozen years. In that capacity, she served three terms by appointment of the Governor of Texas on the State Advisory Committee and received the 2002 NACG Freedom Fighter Award.

She was born in Baltimore, Maryland, lived more than two decades in Virginia, lived in New Braunfels, Texas, for another two and is now back in the shadow of the Blue Ridge Mountains in Bedford, Virginia, with her husband and a sheltie named Emmitt Otter.